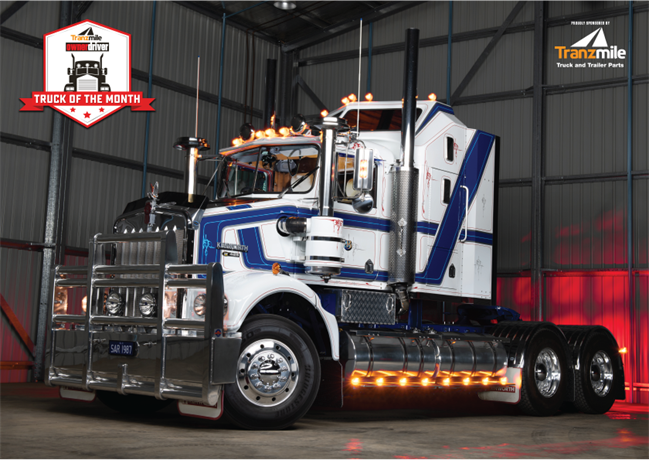 Words and photography by Warren Aitken
Article courtesy of Owner//Driver

From owner-driver to paid driver and back again, Denny Bowen has always had a thing for the Kenworth brand … especially the SAR variety.

There are many ways to kill a Saturday afternoon in Tamworth. Being the home of country music in Australia you’ve got the big Golden Guitar Centre as well as the Country Music Hall of Fame. If you want to get more involved there are countless bars and honky tonks where you can get your boot scootin’ boogie on.

Due to the fact I look like a kid walking through spider webs when I dance, I decided to kill my Saturday afternoon doing something much more interesting. I set about tracking down a man whose ‘midlife crisis’ (that’s his wife’s words, not mine) is one of the sharpest looking Kenworth SARs you are likely to find.

Denny and Sara Bowen are the husband and wife team behind Bowen Contracting, who were just unlocking the gates to their new depot in Tamworth NSW when I tracked them down.

As we sit in the afternoon sun and discuss the origins of the family business, we are dwarfed by the three eye-catching rigs running under the Bowen Contracting banner. A recently added 2018 Kenworth T659 coupled to an impressive Freighter B-double set; a tried and true Kenworth T604 which has already done two turns off the clock and marches onto three million soon; and the aforementioned ‘midlife crisis’, a 1987 Kenworth SAR.

The current three Bowen rigs are a far cry from Denny’s first truck. Back in 1990 at just 25 old he bought a 1974 Kenworth K124, a far cry from the luxury of today’s T659. With a 40ft side delivery bin behind it, Denny was carting grain out of the farms he was working on up in Boggabri.

With a wealth of experience on the land threw family farming mixed with a family history on the roads, Denny’s dad drove trucks, as did his uncle. It was almost inevitable Denny would end up combining the two.

From the purchase of his first truck Denny started with grain and farm work. Over the next decade he learned a lot and adapted his skill and equipment to follow the opportunities he got. 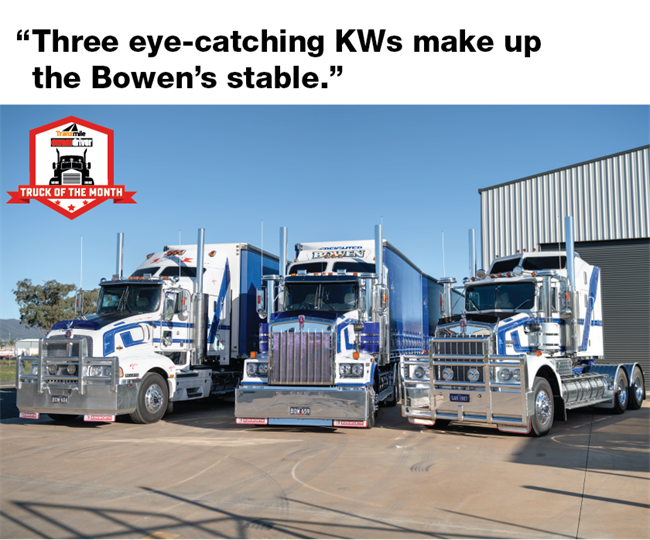 Grain haulage changed to furniture carting and back to grain again – and a bit more in-between. With these changes came a few different trucks and trailers adorning the Bowen fleet.

One of the standouts was a 1983 LNT Louisville which carted its fair share of grain for the Bowens. Sadly, the big girl got written off as well as Denny’s 40ft side delivery bin when it was involved in an accident in the late ’90s. That incident also led to Denny stepping away from the owner-driver role and find work as a paid driver with Tamworth Carrying.

The working for wages role didn’t take for Denny and in 1999 he decided to get back in the company game. Once again he wasn’t going to be held back by anything and jumped straight in the deep end, purchasing a brand new tautliner trailer and a 1981 Kenworth Aerodyne. He then set about looking for work.

"I rang a loading agent in Melbourne and went from there," Denny explains. After a few ‘pay-the-bills’ loads he ended up carting Tontine Pillows from Melbourne to Brisbane which lasted for almost a decade. While the work was light, the old Aerodyne was showing its age in terms of comfort. "You couldn’t keep a Big Mac on the console; it would fall off every time you hit a bump," Denny amusingly recalls. And we all know there’s no shortage of bumps on those roads.

He recalls thinking, "If I’m going to keep doing this I’m going to get something more comfortable". And so he did. 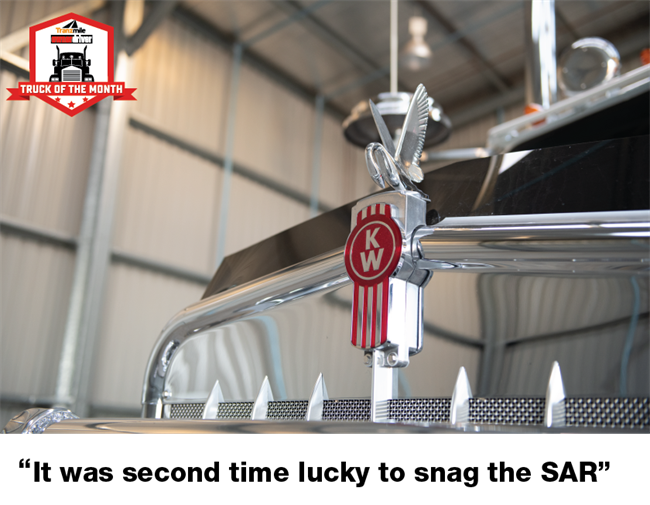 The Aerodyne was traded in for a 1989 Kenworth T600. The T600 ended up racking up over a million kilometres over the next five years before Denny eventually traded it in for a brand new T604.

From new, Denny drove the T604 up and down the east coast carting anything and everything. He shared the truck with his brother Gavin who was the ring-in relief driver, particularly over the harvest season when Denny and Sara returned to their roots in contract farming and were kept busy up southern Queensland.

Gavin kept the single truck busy running regularly out of Melbourne, hauling product back up into the Tamworth area. This arrangement worked well until the couple decided to move back down to Tamworth permanently and leave the farming behind.

With the 604’s run set, Denny decided to add another truck to the fleet, this time for himself. So arrived the big T659.

"It’s the closest thing to an old school SAR I could get," Denny admits, when I question his choice of truck. "I love it."

With a new B-double behind it, Denny tends to follow his brother’s tracks down south now. "We kind of hop, skip and jump loads down to Melbourne, then get a milk run back up to here," he says, referring to Tamworth.

Denny also admits the lack of manufacturing around the area means little to haul out of the region, but there’s always plenty coming in.

The little comment about "as close to an SAR as I could get" also reflects the motivation behind truck number 3 (though if he had to rank them, the SAR would be number one every time). 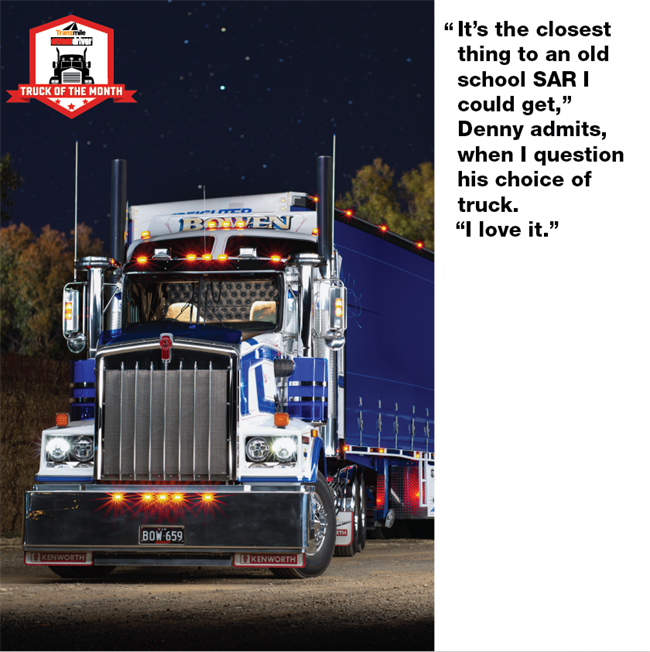 Referring to the one he finally did purchase, he explains, "I knew this one, we used to load beside it in Melbourne. He subbied for FCL … Gary Jones. I looked at it every week down there."

Gary had told Denny that he would sell it when he retired and when Denny received a call from wife Sara letting him know it had appeared on the web for sale, it seemed destined to be.

Unfortunately timing couldn’t have been worse. Having just bought the T604 and knowing how much the SAR would cost to get up to the standard Denny wanted , he ended up missing his shot.

Five years later and once again Sara noticed the truck was again for sale. It’s at this point I believe Sara loses her right to roll her eyes, or comment on Denny’s midlife crisis, as she has now become an ‘enabler’. It’s been her work that has given Denny two shots at his beloved SAR and he didn’t miss it the second time around.

The truck had had a few changes since it rolled out the Kenworth doors many moons ago. The original 350hp Cat had been replaced at around 1.5 million kilometres with a new 425hp Cat and a new 18-speed gearbox, replacing the factory-fitted 13-speed. The only other major change had been the move to eight bag suspension. 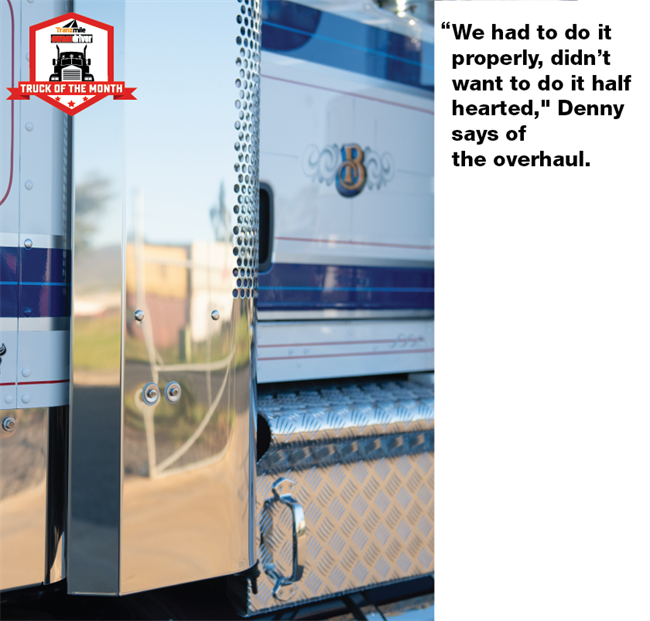 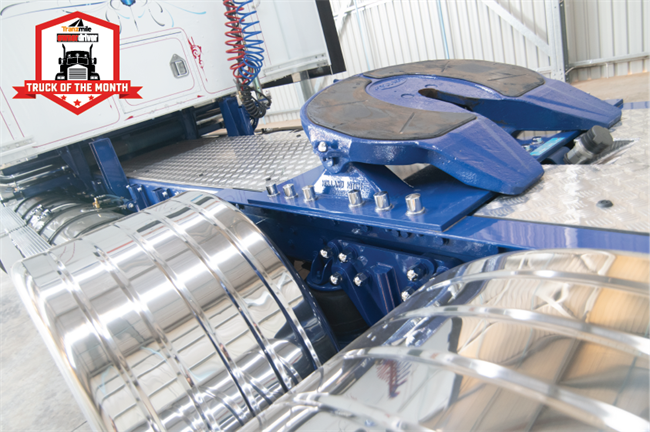 Denny sent it to the maestros at Klos Custom trucks for its makeover after picking it up in Adelaide. "We had to do it properly, didn’t want to do it half hearted," Denny says of the overhaul.

That philosophy meant when the Klos boys found a bit of a corrosion issue with the cab, the three-month project turned into an 18-month mission. But it was a successful outcome. Klos kept a lot of the original SAR intact, including most of the interior.

On the exterior, rather than opt for wrapping the original tanks, Denny leaned towards a life of elbow grease and polish to keep the tanks as shiny as day one. A few gleaming add-ons were fitted outside, as well as a nice big bull bar, which was mainly because the truck went straight to work once it had been finished in Bowen Contracting colours.

The SAR racked up a further 20,000 kilometres before she got semi-retired. "The original plan was to work the SAR, but after two trips to Melbourne, I was like, ‘Yeah, this is not happening," Denny tells me.

The SAR’s retirement plans are still up for debate. Denny is keen to occasionally hook it up and do local work, while Sara is drawing up plans for a very large glass display cabinet for the SAR at home.

Whatever happens to Denny’s midlife crisis, you can be sure it’ll be impressive. The Bowens Contracting fleet may be small but its appearance and performance is as big as any fleet out there. Well done, Bowen Contracting. 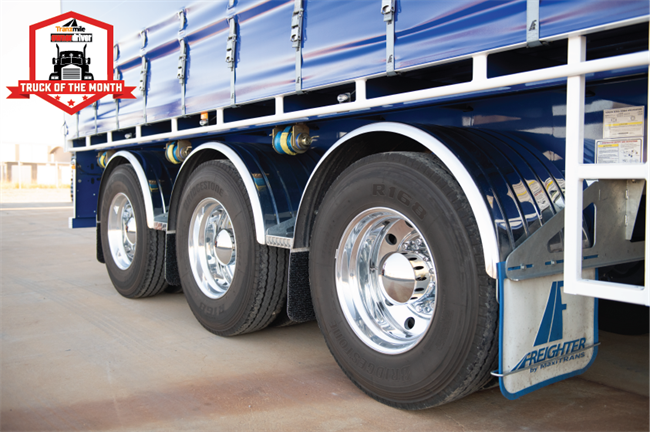 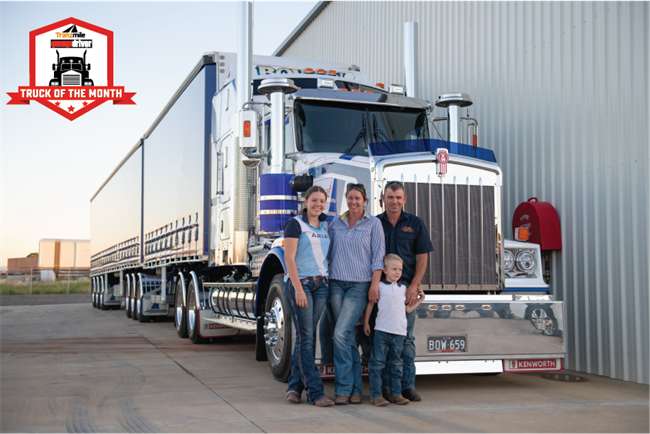 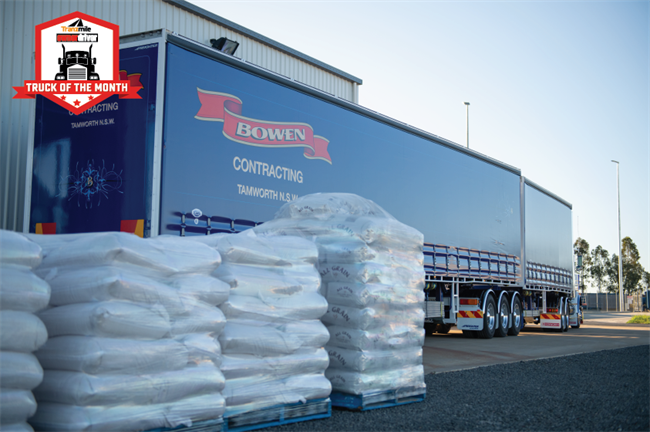