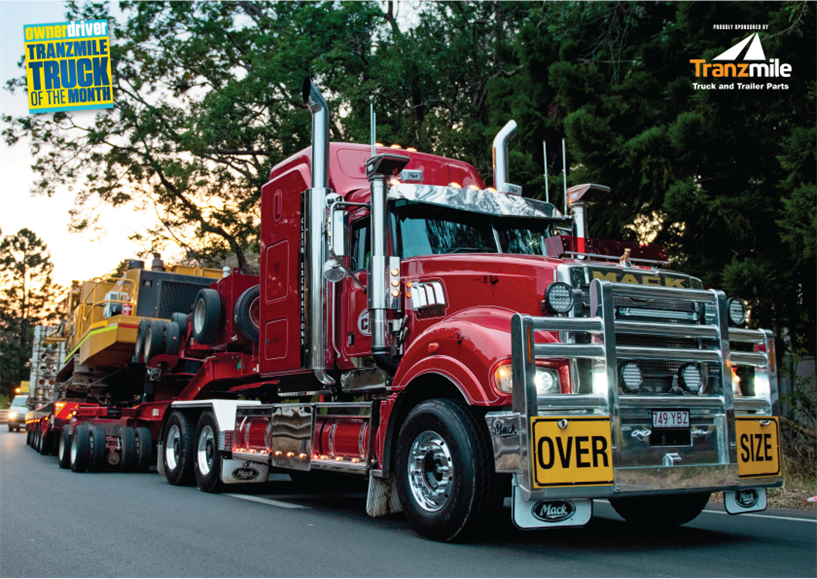 It’s 1am and as quiet as a Marcel Marceau concert. For an express runner, it’s about half time. For an Uber driver? Not so good. On this particular day, however, I had to drag my sorry butt out of bed in order to go and grab some photos of the well-oiled Clein Group rigs putting in the hard yards.

I’ve always had a lot of admiration for those in the heavy haulage sector of our industry. It’s one of those specialties where your patience, your attention to detail and your skill levels are stepped up a notch. Considering my patience runs out while waiting on two-minute noodles, it’s not surprising I’ve never dipped my fingers into that pie.

I do like watching the professionals at work though, and in order to get some sit down time with the man behind Clein Group, I had to start my day at that magical 1am timeslot.

Eagle Farm in Brisbane was my destination to catch up with Justin Clein. While I wandered around trying to snap some photos of Clein’s immaculate 2013 Mack Titan, Justin (who would be driving the Titan) was busy doing all the things that have made Clein Group such a success. Checking the load, running through the game plan, checking the load again and paying close attention to every detail to ensure everything would run smoothly.

Once Justin pulled the Titan out onto the road, a second truck was attached to assist the load up over the Gateway Bridge. That job was taken care of by another fellow, Darling Downs contractor Steve Joyce, driving an ex-Clein’s 2013 Super-Liner.

With a combined 1285hp, the Gateway Bridge was merely an exaggerated speed bump for the team who would connect again at the bottom of the Toowoomba Range for the same push pull manoeuvre.

While the sight of the two mighty Macks scaling the Gateway Bridge was impressive, I found the intricacy and precision through suburban roads to be the highlight of the day. Once again, I’ve had the privilege of watching several heavy and wide loads move and the skill levels involved still garners my admiration.

Once we made it to Toowoomba, the home base for Clein Group, the mighty Titan was un-hooked and company driver Matt Wyatt hooked his FH16 Volvo under the trencher. Matt would continue out to Roma to deliver the load before heading south for his next job while Justin and I headed back to the depot to find out how he went from riding cutting quarter horses in the United States to running a successful heavy haulage company. 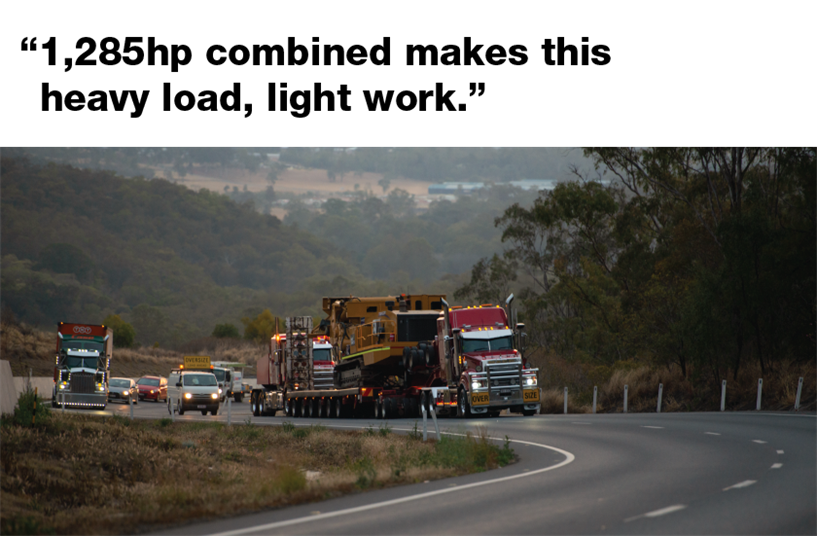 UP ON THE FARM

Clein Group’s yard on the Darling Downs is right out the front of Justin’s family home. His lovely wife Loretta and their three girls are never far away from the trucks. Look out the front window and the view is full of big red trucks. Look out the back window and the big red trucks are replaced by big angry longhorns. The family farm ensures there is very little downtime available to Justin or Loretta.

The six-truck fleet is dominated by the Bulldog brand. "I’ve always loved Macks, especially the V8s," Justin admits. That V8 addiction is fuelled by the immaculate 1987 Mk II Super-Liner. It may look like a show truck, but it still earns its keep.

The fleet has peaked at much higher numbers though. Since Justin first began almost a decade ago he has ridden the waves of customer demand in both numbers and diversity before finding a comfortable niche that now drives Clein Group. 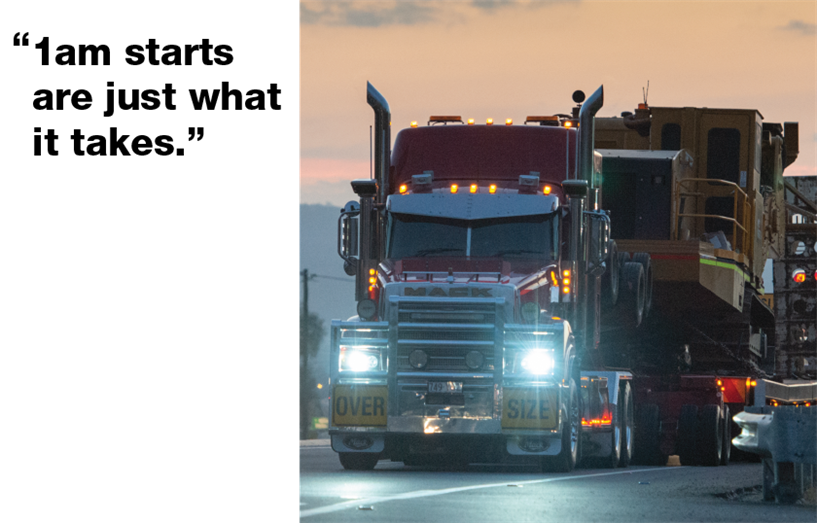 "I’ve always been around trucks in some way, shape or form," Justin confesses. Growing up around central Queensland and the Northern Territory, Justin’s parents were running trucks doing general earthmoving work. Justin learnt how to get his hands dirty fairly early.

The only break from the industry came when Justin was in his late teens and he had the opportunity to travel to the US and work with some trainers riding cutting quarter horses. He learnt from the world’s best before returning to Australia in 1996.

The next decade or so saw him gain invaluable experience in all facets of business. Justin spent time working in the mines doing everything from dozer driving to dragline operating. He progressed further up the chain into a supervisory role before becoming part of a business advisory team which allowed him to see the cogs behind the wheels of big business.

"It was a big change; I did struggle with it a bit, being in the office wholly and solely," Justin recalls.

"I did learn a lot though, a lot about big business and how they structure things."

It was after this that Justin decided to start Clein Excavations and Tipper Hire.

"When I started I just envisioned being an owner-operator," he tells me. "In six months we had three employees then, in the peak of it, probably 2014 to 2015, we had 50-odd staff."

That success was on the coattails of Chinchilla’s gas boom. At the time Clein Excavations and Tipper Hire were instrumental in preparing and establishing lease pads and road construction for the gas industry. Like any boom though it eventually slowed down. With that came a change of direction for Clein. 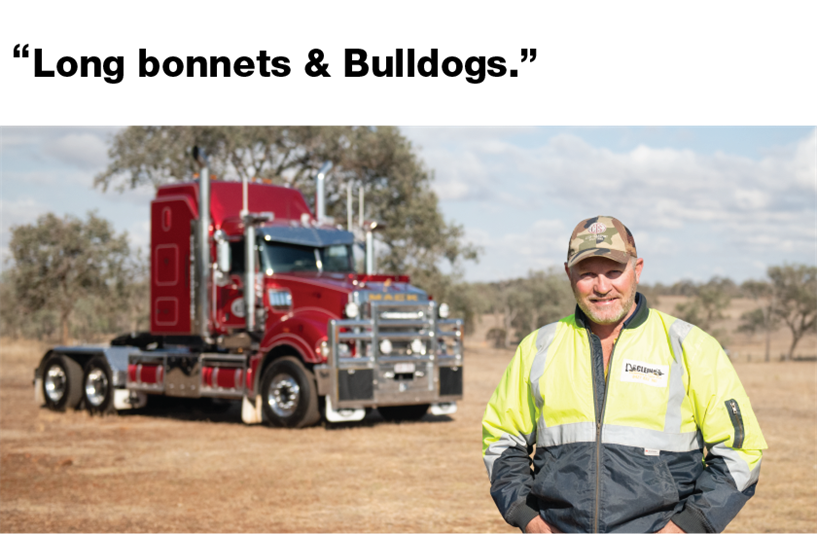 Clein Excavations and Tipper Hire morphed into Clein Group and Justin found himself transporting other people’s equipment rather than his own. His reputation had become well known for getting to jobsites on time. That reputation ensured a solid client base eager to employ his services.

With his trusty Cat-powered 2006 Superliner, Justin set about securing his niche in the heavy haulage market. From one truck he has grown to six, managing to keep himself busy in an industry where the regulations make it tougher for those doing things right.

"The permit system is one of our biggest issues, especially coming out of Brisbane as it can take three to four weeks to obtain a permit," Justin exclaims as he points out the financial strain that this places on his business as well as his customers.

"Delayed permits can cost tens of thousands of dollars or more very quickly."

With permits an unavoidable issue in heavy haulage, Justin has had to deal with every level of the system over the years. From the office personnel tasked to the officers tasked with enforcing the system, he’s observed how unnecessarily difficult their jobs are as well.

"It’s a shitty permit system but it’s what we have," Justin points out. He reiterates that the people within the system are great but it’s the system itself that fails. The lack of an across-the-board national permit system is a business killer.

To do everything by the rule book and follow the regulations costs a lot of money, especially given the new Chain of Responsibility rules. Most permits can take up to 28 days so operators and clients alike never really know when they will be approved. The trucks can be sitting idle for days or weeks awaiting approval. It’s that uncertainty that hurts the transport operator and the client. Clein, like most heavy haulage operators, has invested solidly in the current system but also see how changes to it will benefit everyone.

Justin believes it needs to be simplified as he explained the process of period and single trip permits or the need for each application to go through each council. Meanwhile, I just sat there looking like a dog trying to do algebra.

Clein’s now have a dedicated lady with the tolerance to negotiate the paralysing permit dance. It hasn’t sped up the process, but it’s made Justin’s life easier. 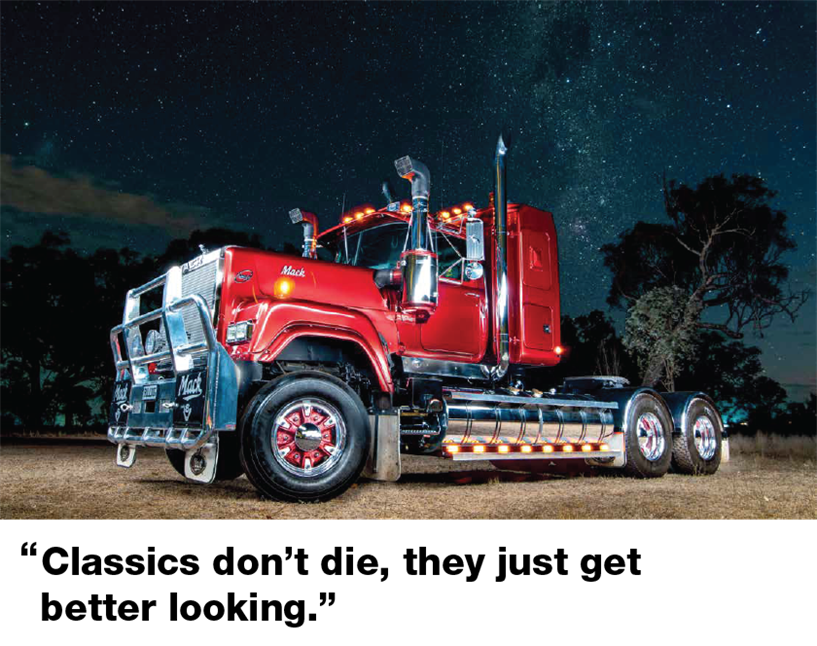 When it comes to the trucks, it’s all about the Bulldog and the bonnet. Three Super-Liners, a Titan and a CHR Mack dominate the fleet. There is the one cab-over though, the FH Volvo. While a cab-over is definitely a cost saver, saving thousands on pilot vehicles with a shorter combination length, Justin is a firm believer in doing what he can to manage his drivers’ fatigue.

"You just can’t send a driver away for maybe three weeks with such a small cab," Justin states. "The best way for us to manage fatigue is to give our drivers the most comfortable cab." Hence his preference for the bonneted Macks.

He believes if the government is serious about managing driver fatigue then it needs to look at allowing people to have trucks with decent bunks to accommodate lengthy stays away.

Time away from home goes without saying for the heavy haulage drivers. The shiny red trucks of Clein Group can be seen among the Victorian and Northern Territory landscape as well as every corner of Queensland and New South Wales.

However, the workload is at a point where Justin is now able to spend more time at home running the business.

"We’ve had the opportunity to grow again," he admits, "but we don’t want to do it for the sake of growing." Justin’s preference is to solidify his company and ensure he’s offering the best service to his customers.

"If you’ve got quality equipment, quality staff and a good safety record it attracts a certain type of customer." 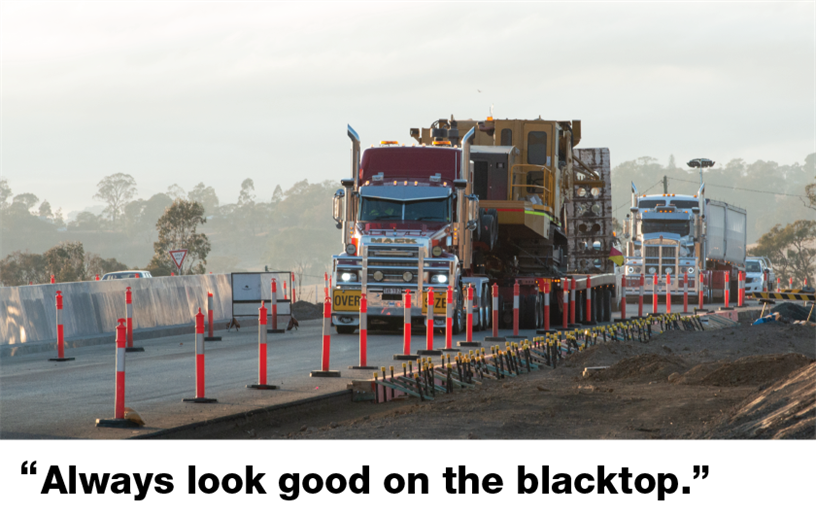