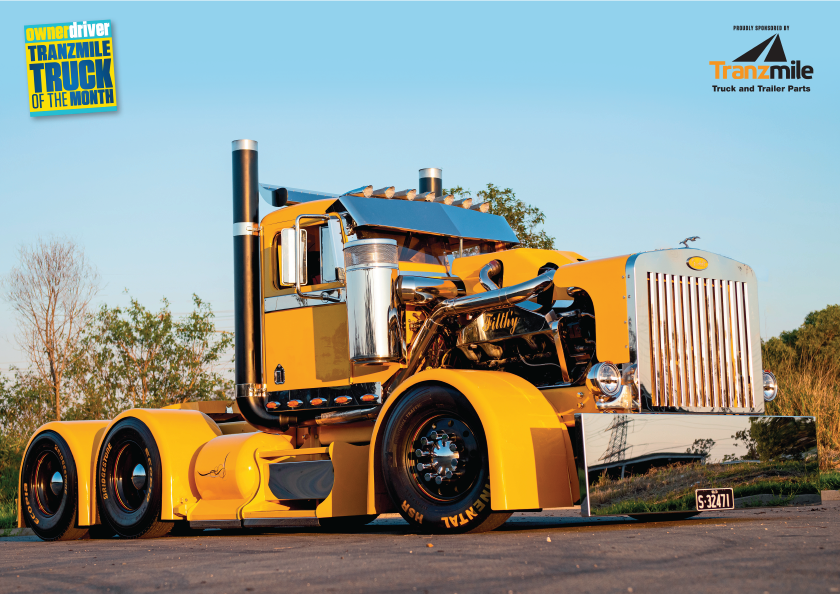 It was a case of ‘Back to the Future’ for Michael and Melissa Lake when they set about rebuilding a White 4000 into an astonishing burn-out show attraction named ‘Filthy’.

NOW I’M NOT SAYING I’m an expert in identifying every make and model of truck. I can pick a Series 3 Scania from a Series 4, I can identify a new breed Mack Super-Liner from an old school Super-Liner and I have an above average success rate when identifying a 4900 Series Western Star from a 4800 Series. However, standing next to Michael ‘Mick’ Lake and his wife Melissa’s ‘Big Bright Burnout’ truck, I may as well have been a vegan at a Bunnings Store trying to choose a sausage. I had no idea what I was looking at. For the record it’s a 1975 White 4000. Admittedly it’s a White 4000 with 19 modifications registered on its mod plate, but it is a White 4000. For those of you now claiming “oh yeah, I knew that, it’s obvious”, nobody believes you. 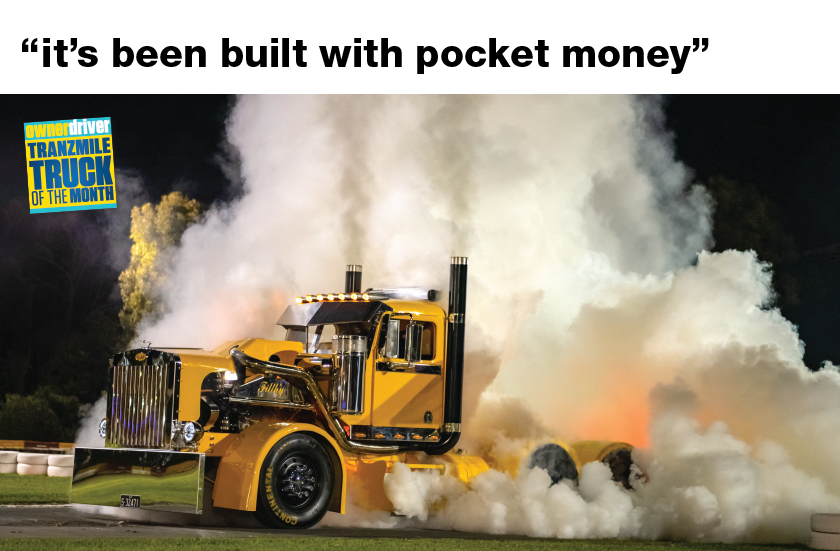 Another hard-to-believe concept is the fact that this beast of a truck is actually allowed to, and capable of, towing trailers. Yep, it’s all registered and legit. Mick could hook it up to a trailer and go for it. Legally it can still only do 100km/h, but from the traffic lights it’ll blow more smoke than a steam train, leave more rubber behind than a top fuel dragster and be off the line before the boy racer next to him had tidied his man-bun.

Would you want to though? Melissa Lake’s emphatically eloquent summary of the ride as “rough” would indicate the truck isn’t going to be seen doing Kempsey changeovers anytime soon. So I guess the question is, why? Well, Michael and Melissa took the time to enlighten me as to how a truck with more decades under its belt than I have alive ended up going from a ‘Big Boy’s Toy’ to a ‘Big Toy for Boys’. 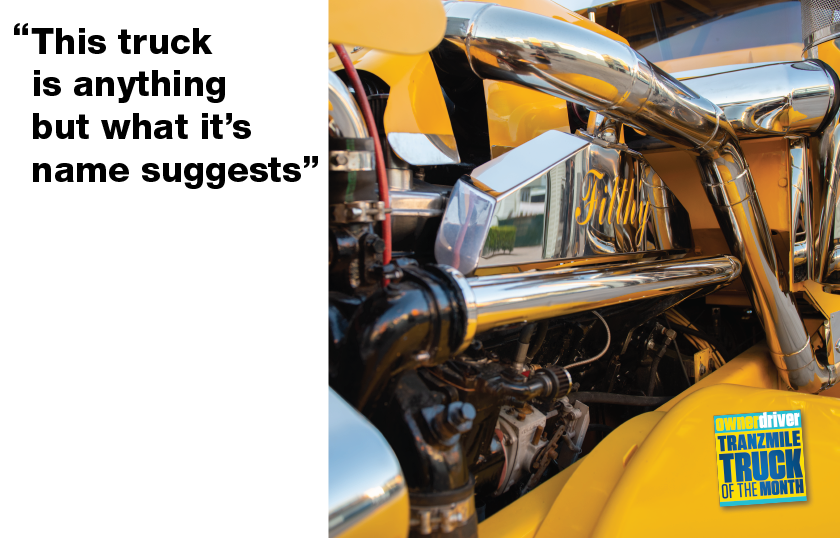 Filthy’ is the name of this jaw dropping weapon. It seems a little bit of an oxymoron when the truck is immaculate, but the name was actually taken from the campervan owned by the man who started the whole project many years ago. All be it, the original plan was very different to today’s end result.

The White 4000 began as a project truck in Mackay, Queensland. Greg Peirpoint owned it and he had a vision of building a land speed record truck.

Greg had intended to rebuild the White with a midmounted 1710 Cummins he had purchased. Over several years he gathered different parts needed to build his vision, but unfortunately health issues put paid to his plans and he was unable to get it off the ground. The project got shelved with different parts sent off for sale and others just gathering plant life in Greg’s backyard. That’s where Mick steps into the story. 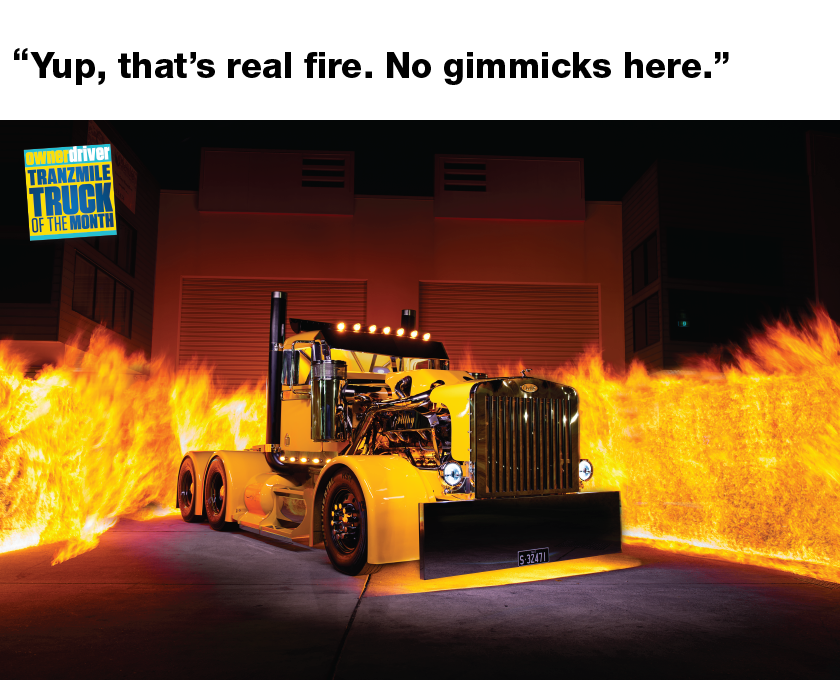 Mick and Melissa Lake own Truck’in Stainless in Brisbane. It’s a customising company Mick began after years behind the wheel himself. During his time driving he would actually design and fabricate additions to his own trucks from home. As he progressed from cardboard templates to computer cut templates, he moved away from the steering wheel and into the workshop.

With the growth of his company, his backyard workshop couldn’t keep up and he moved to a dedicated workshop in Brisbane. If the name sounds familiar to readers that will be because a recent story on an impressive UD Quon running around the Gold Coast featured the shine of Truck’in Stainless in Owner//Driver’s August 2018 edition.

Even as an adult (I use that term loosely), Mick has always been a big kid with a love of loud engines, black smoke and ‘Phat’ trucks. Even when he went fulltime with Truck’in Stainless, he was never far away from driving. In fact, Mick and his neighbour Kimbo (who would be an ever-present source of assistance with ‘Filthy’) built a driving simulator in Mick’s house. Like most of Mick’s plans it quickly got out of hand and the next thing he is in contact with Greg about purchasing the cab of the White 4000 in order to make his simulator just a little bit more realistic. 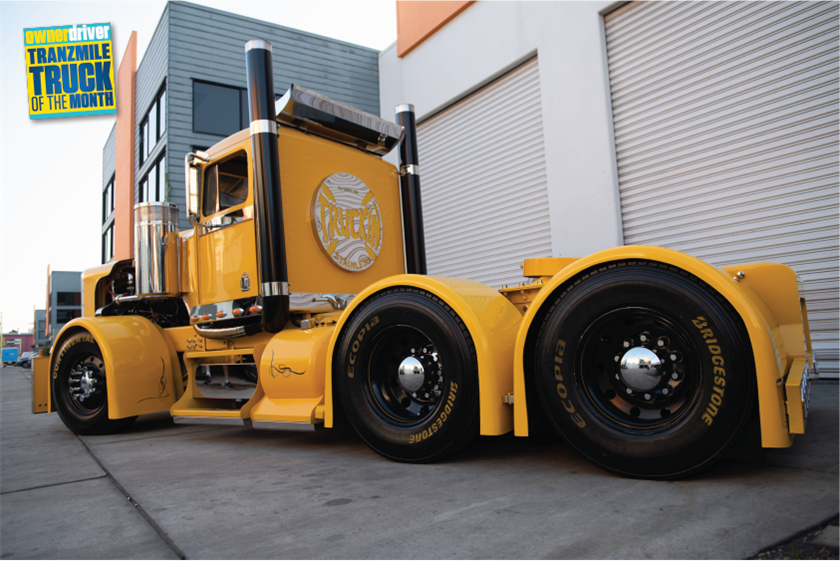 Friday nights downstairs at Mick’s place now involved a few beers and stepping into a fully enclosed replica truck cab to cruise down the New England highway. They did leave Greg’s roll cage in the simulator as well, for safety purposes!

The logical next step after building a functioning simulator is obviously to remove the computer and build a burnout truck. I mean, who wouldn’t go down that road? While not obvious to many, there is an eight degrees of separation thing working here. Those Friday nights with the boys downstairs, also involved watching a lot of “I just wanted to build a ‘Phat’ truck.” YouTube videos. These videos were the source of Mick’s plans.

“I just wanted to build a ‘Phat’ truck,” Mick tells me. “Watching the Canadians race those trucks [made Mick think] I wanna go race them. That was my plan, build a truck you could hook up to a trailer and go off its head,” Mick laughs as he envisions himself chucking a burnout with a trailer on. 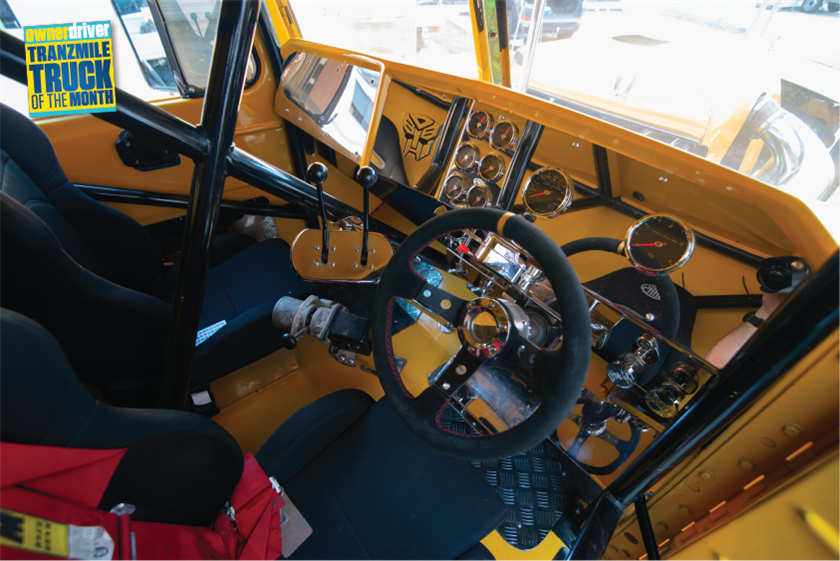 When Greg Peirpoint heard Mick had bigger plans than just a gaming room ornament, he offered the other parts of his project truck. While Mick at the time had no real direction other than a few drawings, he took all Greg’s assistance.

In the end, very little was used of the previous project-truck, but Mick admits it all helped. “It was a starting point for us,” he said.

While Greg had intended to build a land speed truck, Mick opted for a burnout rig. The original rear end that Greg supplied wasn’t suitable with Mick admitting, “you couldn’t put lockers or anything in” and Mick was determined to be spinning all eight tyres at once.

The motor that Greg had was a Cummins V12 1710 putting out 900hp (671kW) and 4,000ft-lb (5,423Nm) of torque. Unfortunately, having sat for nearly a decade, when Mick did start it up one New Years’ Eve he found all the liners had perished and there was fluid going into parts of the motor not designed to have fluid in. 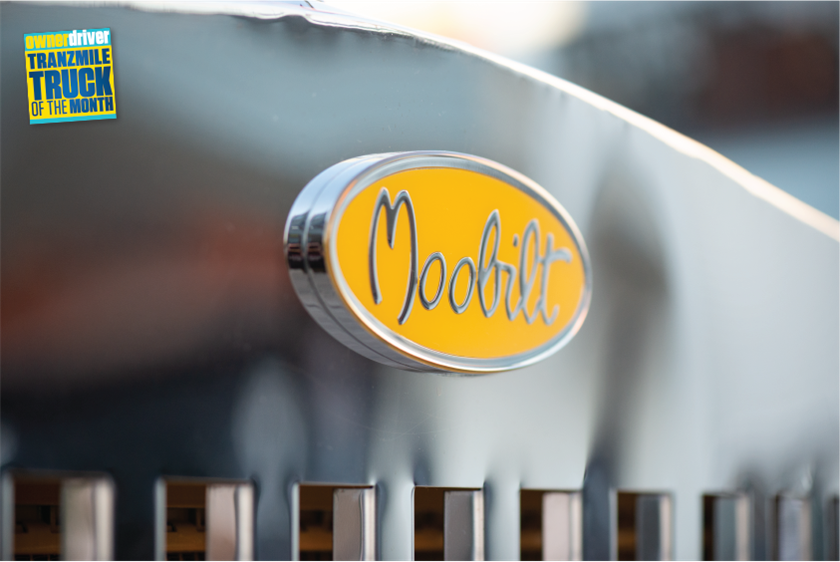 In order for Mick to fulfil his burnout truck project he set about acquiring the parts he needed from wherever he could. Mick found the rear end he needed by buying an ex-Brambles White Road Boss. Greg helped out again sourcing and purchasing another old Cummins 1710 which Mick went and picked up from Mackay. From there it was simply an easy case of a lot of redrawing, shifting, machining, testing, retesting, more machining and a whole heap of swearing as ‘Filthy’ fell together.

Obviously, ‘falling together’ understates the difficulties involved. The new engine was just a tad bigger than the old White’s original motor, another understatement, so adjustments had to be made to the front axle and cab position. A lot of machining was needed in order to assure the driveline all fitted together nicely and wouldn’t fly apart when Mick started winding up that 900hp V12. Over the course of the last few years Mick has slowly put together the truck, time and money dictating the progress. “It’s been built with pocket money,” he confessed. He has been aided by his own creativity in design and ingenuity. A case in point – why build fancy new mirror arms when you can just use the towel racks from a retirement home?

When asked about where he comes up with different designs, like the door steps, the bonnet, or the air and fuel tanks, Mick admits: “I dunno, I just draw pictures, then make it.” Melissa adds with a grin, “I do wonder what’s in that head?”

So, after many years of tinkering around until near midnight at home, and the last 12 months with the help of a small working bee, the truck was moved from Mick’s house to his workshop in Brisbane where the new motor was put in and the end began to come into sight. The neighbourhood shook as the motor was tested, tested and tested again. Mick then set about completing the cosmetic side of things. He decided to keep the roll cage that Greg had originally put in the truck for no other reason than it looked cool. Sam Keddie from Sam Keddie Signs came in to do all the art and scroll work and before you knew it, the truck was all finished. On August 25 this year Mick’s downstairs race simulator made its debut as a burnout truck at the Lowood Truck Show
in Queensland’s Lockyer Valley. He admits the reaction was a fair split of “what is that!” and “what is that?”, but once he starts her up the crowds just love it.

Since the wheels have been spinning, interest has continued to grow as people request displays. I was there to catch its debut at a car event at Kingston Park Raceway where even the professional burnout car owners where coughing their way through the tyre smoke to acknowledge ‘Filthy’s’ efforts.

If looks alone don’t get you intrigued in this ‘Filthy’ truck, then make sure you get down to its next event. It’s a smokin’
sight to behold.