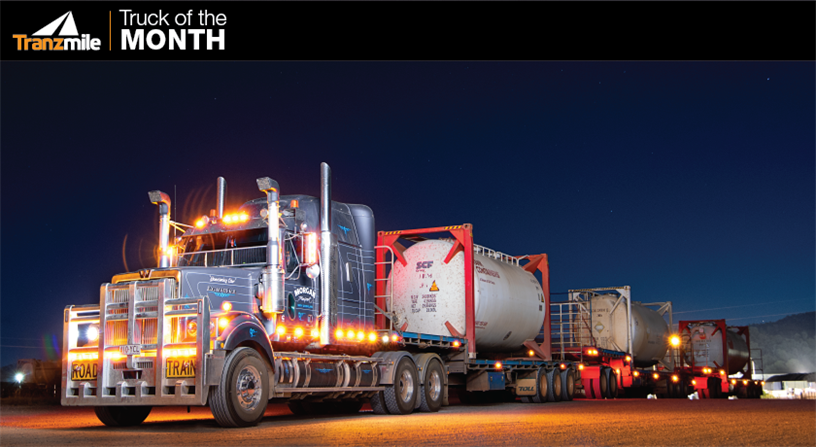 Despite his mechanics’ qualifications, Townsville-based David Morgan kept returning to the sights, sounds and experiencing life behind the wheel of big rigs.

It is reported that Groucho Marx once said, "when you’re in jail, a good friend will be trying to bail you out. But a great friend will be in the next cell saying, ‘damn, that was fun’."

After a couple of hours sitting down with David Morgan you get the distinct impression he would be a great friend, or maybe he would just need a lot of good friends.

David is a Townsville-born local and the self-confessed brawn behind DJ & KA Morgan Transport. His wife Kellie, he admits, is quite rightly "the brains and good looks of the outfit".

The company has been in operation in one form or another for nearly three decades and has built up a reputation for professionalism and quality with its clients while still running with the bush ability to get in and get the job done.

David is a fully qualified mechanic, his apprenticeship served in his father’s truck dealerships.

His father began with Scania dealerships, then Freightliner/Ford dealerships in both Townsville and Cairns. In fact in 1987 they were one of the biggest Scania agents outside of Melbourne.

He served his time there before trying his hand down at a mine in Blackwater in central Queensland. Although he was there primarily as a mechanic, when the workshop had downtime it gave him the chance to do a bit more driving as well and fuel his driving bug.

Now this wasn’t David’s first driving experience. Unfortunately I cannot repeat some of the tales I had the pleasure of laughing away to. We did however discuss a story David had ‘heard’ about a young 14-year-old who used to go for a ride with a family friend in his 113 Scania, pulling five decks of cattle through the inland track.

When he got to the flat areas around Hughenden the old fella would let the kid drive while he grabbed a sleep. The one-and-a-half-hour journey would take three hours as the kid was under strict instructions not to exceed 60km/h. A couple of times the kid would get a little rambunctious; flick the range splitter and step up. Unfortunately for the unnamed kid the distinct Scania air swish noise that accompanied the range change button was always followed with a distinct "Oi" from the bunk. That "Oi" would immediately lead to a repeat of the Scania swish as the upward gear change was revoked.

Any kid that grew up with experiences like that would ultimately end up with diesel in his veins.

Now, I’m not saying that that story involved anyone specific but it’s strange just how much diesel is running through David’s veins. From there his driving career was hampered by the fact he was a damn good mechanic and his future endeavours were guided by that.

He returned to Townsville from Blackwater to become involved in the new company, Talco. Although he went to Talco for his workshop skills it was actually David’s ability to keep track of the company’s trucks and their movements at any moment that saw him move into an operations role. He wasn’t turning up suited and booted for the boardroom but his skills there helped Talco grow from a five-truck fleet up to over 70 vehicles. 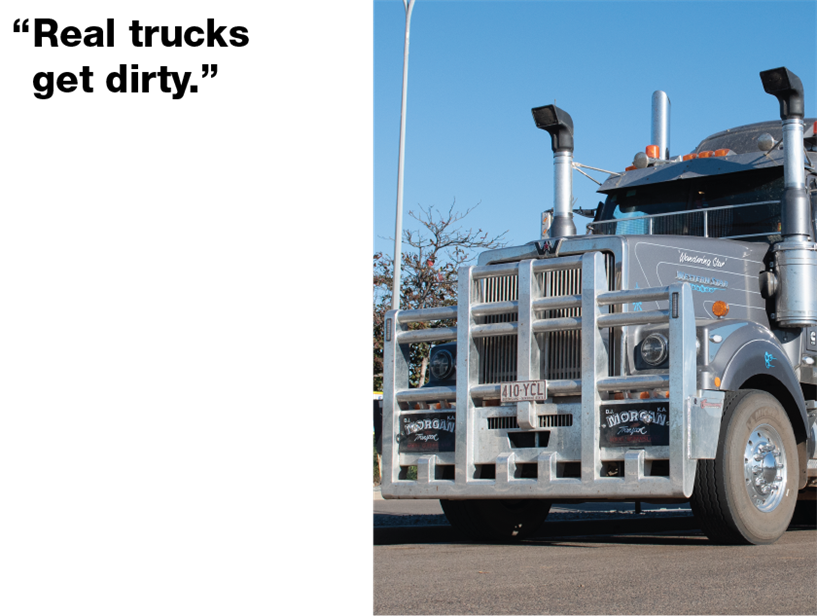 David moved from Talco to another management role at Trailer Sales in Townsville before opting to again get the grease under his fingernails full time by opening the old Chemtrans workshop and getting back into his dirty overalls. By the time he walked away from that venture the company had service outlets in several other different locations as well as the busy Townsville depot.

While David was busy keeping other companies in motion, both literally with his spanners and grease gun or figuratively from his comfortable office chair, he was also showing off his multitasking skills.

Before DL &KA Morgan became the core business for David and Kellie it was successfully running in the background. While it was most often a couple of trucks towing for small contracts, it had swelled to as much as five trucks when towing for Telco. It also afforded David the chance to refuel his driving passion, as well as giving Kellie some peace and quiet occasionally.

In fact, DL & KA Morgan grew and flourished when David downed tools fulltime. The last decade has seen the fleet grow to include two Volvos, two Kenworth SARs, a new Legend 900, a 4900 Western Star, a T408 as well as a ‘valuableliner’, as David likes to call it.

Morgan Transport admits much of its work comes from towing for other people. Its set work includes four triples a week working out of Townsville servicing the mines around Mt Isa, while the Morgan trucks are also a regular on the highway between Mackay and Cairns. There are still a few different trailer configurations in the fleet however allowing David to do what he does so well – "anything and everything".

The latest truck in the fleet is the big 4900 Western Star, the replacement for a well worked Mack Titan. When the Titan’s motor decided to redecorate itself, from the inside out, David needed a replacement. This is the reason for the Western Star’s standout full colour appearance. All the other trucks run the same style of paint work with slightly different colouring.

The other concept that’s kept the company thriving is David’s motto of "shiny from the inside out". Regardless of make or model, the fleet is meticulously maintained.

David’s passion for trucks means his yard has the eclectic variety of a true lover of trucks. As we sat and chatted, amid a backdrop of the International TranStar David and his father had rebuilt, the departure of his beloved Mack Valueliner put a halt to our conversation. Like a parent turning their head to listen with intrigue at the silence of their child, both David and I absorbed the deep tones of the Valueliner’s V8 rumble down the road. With a grin larger than a roadhouse T-bone, David remarks, "man, you gotta love that sound!"

The other truck that brings a huge smile to David’s face wheels into the workshop as we sat and chatted. It didn’t have the thumping tones of the Mack but Morgan Transport’s 900 Legend has the looks that more than make up for that. "As soon as I heard about them I just had to have one," David says.

It’s not just there for the looks though. It’s already racked up around 150,000km of hard yards with a triple in tow. "It’s the best truck to drive," David admits with pride as he views his stunning 900. 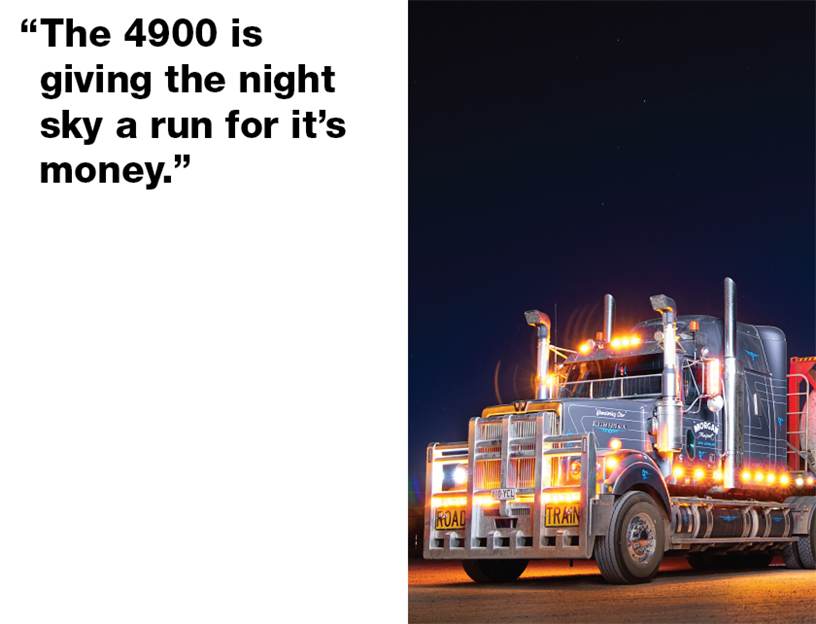 It was after the harmonious departure of the Valueliner that the conversation took a swing from the business to the passion. Both David and Kellie have been in the industry for all of their lives, and through good and bad, both are still turning up each day with a smile and love for their trade.

David confesses that one of his most favoured days of the week is the Saturday catch-up with his team. "On a Saturday here we come in, we do work. Most of the blokes on their day off come in to do stuff," David tells me with a grin.

"I love that, I look forward to that. We yell at each other, talk shit, whatever. They’re here ’cause it’s fun."

You can tell from David’s tone and inflections that it’s those kinds of days that allow him to forget the pressures of being the boss and just recharge his love of the transport industry.

Whatever the future holds for the transport industry, it is teams like DJ & KA Morgan that will keep flying the flag for the passionate players that are the backbone of what we do.

As the old adage goes, ‘find a job you love and you’ll never work a day in your life.’ I’m sure most of the guys at DJ & KA Morgan’s will tell you that David must really love his job.